I stumbled upon this seemingly little-known film, despite its lead actors. Matthau and Dern are cops trying to unravel a mystery. It’s a bit of a strange film... in many places, it’s almost a documentary showing the drudgery of solving a crime… not much action. Well, except for the obligatory car chase in the hilly streets of San Francisco.

I’m not sure who the laughing policeman is... I don’t remember any laughing… it certainly wasn’t Matthau!

In the first few seconds of the film, set in the bus terminal, there’s a shot of a guy playing King Kool (Gottlieb, 1972). The machine on his right looks like a Pro-Football (Gottlieb, 1973) wedgehead and the one on his left is a Swinger (Williams, 1972)... 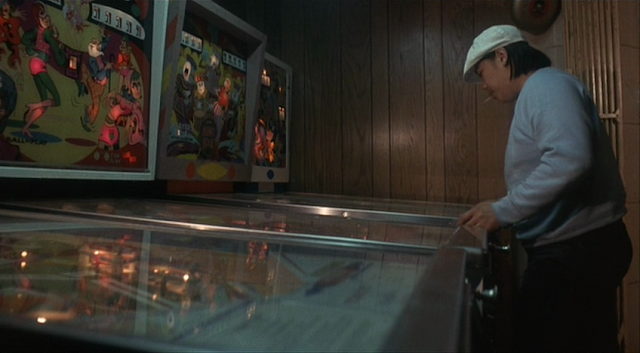 Then the guy rushes off to catch a bus, and now the lineup is complete... from left to right: Super Star (Williams, 1972), Grand Slam (Gottlieb, 1972), Swinger, King Kool, and a bit of the front of the Pro-Football... 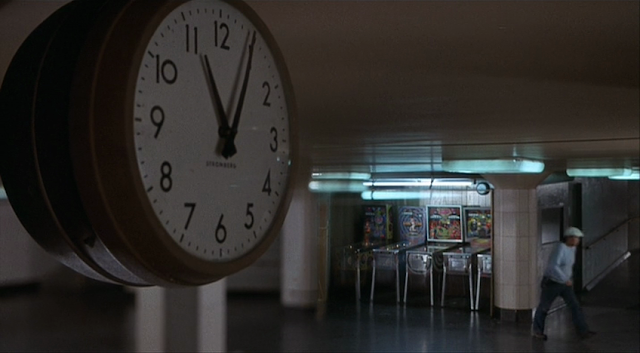 The time is 23:04. The above image is where pinball could intersect with Christian Marclay's amazing supercut film "The Clock". When I saw his piece, it wasn't around this time period, so I can't say if this clip was used or not.
Posted by James Schidlowsky at 12/29/2016 07:53:00 am